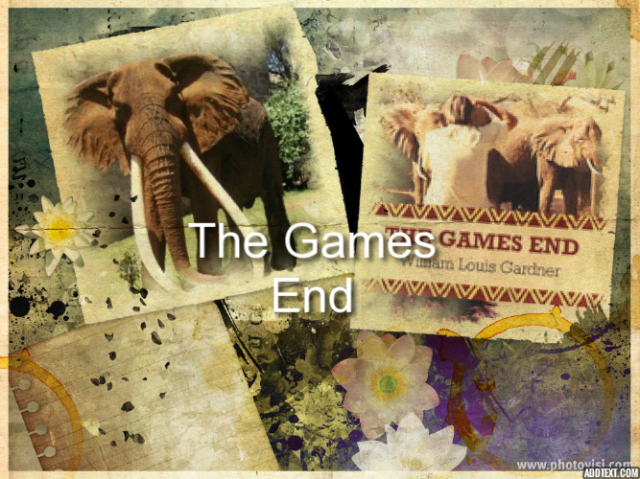 Hollywood goes to East Africa to make a film but struggles with Africanization, intrigue and murder to save the elephant. The film story is a “Moby Dick” theme that is played out with a great elephant, Ahmed, that captures the adventure and romance of the time with its great cast of characters finding them-selves in the African bush working to save the game, but running into opposition every way they turn.

The Games End on Amazon, also available as Kindle for $4.99

In William Gardner’s new book he puts you in the Picture!  Because he has been there and experienced all of East Africa first hand he writes with a clarity, simplicity that flows magically just as does life in East Africa, I could not put it down,  and was sorry when it ended. But hopefully there will be a sequel.

A great read. Loved the book. Couldn’t put it down.

Who hasn’t wanted to go on a Safari? From the first page, the reader is drawn into a web of intrigue, conflict and profound moral choices regarding the plight of endangered species and unrestricted personal greed that will lead to their extermination

This is a total trip, one with a twist and edge of your seat ending. All the ingredients for a thrilling movie adventure. Plus the author has described the scenario with all his personal visual memory of the great Kilimanjaro mystic. there’s a touching unrequited love story to boot.

Knowing the author personally and being responsible for many of the wonderful adventures we have shared through our 45 years of being close friends, may I suggest this as a wonderful read which is based on fact for the most part..It is well written and a very exciting POV of the modern times in the Africa of today as well as years back and the struggles therein!

William Louis Gardner has written a powerful, thrilling and engaging novel that brilliantly explores the endangered elephant herds of Africa.

William Louis Gardner is a storyteller par excellence.  I simply could NOT put this book down.  Based on the true story of “Ahmed”, a legendary African tusked elephant, recorded as one of the largest and most majestic of the species.  READ MORE